In October 2019, the village of Horní Suchá transformed the unused building of the former shopping center at 1257/24a Těrlická Street into a modern multifunctional center "SUŠANKA" (MFC). This building has now become home to sports clubs, a folk dance ensemble and associations dedicated to children, including a counseling center for residents of our village.
Specifically, located in the building:

The ground floor of the building is almost exclusively intended for weightlifter training, where they have their necessary facilities, including an office, warm-up room, changing rooms with bathrooms, including showers - all divided by gender, because members of the weightlifting team are not only boys but also girls. There is also an infrared sauna. The floorball club has set up an office on the ground floor, including a warehouse.
On the first floor, the folklore ensemble Suszanie has its background, including a richly equipped costume room, which can also be used to rent various types of folk costumes, other costumes, costume parts, etc. The ensemble uses a large dance hall with a mirrored wall for rehearse.
The hall is also used by the children's dance ensemble Antidotum, the leisure association Velká náruč and other various interest groups such as Healthy Back, Yoga, Aerobics. This room can be rented for a short time by anyone, after agreement with the MFC administrator.
Velká Náruč has its own office, including a common room there. Tulipán has set up a counseling center where it provides social services for citizens.
The Godula climbing club has its own clubhouse on this floor.
Information about clubs and associations can be found on their websites and on Facebook.
The building is insulated. Solar energy (solar panels) with reheating by a gas boiler is used for water heating, and a recuperation unit with filtration is installed for ventilation of the dance hall and weightlifting hall. It also helps to heat these spaces. Heat is further provided by gas condensing boilers. Everything is technically adapted to save energy as much as possible. With all this, this building has reached the imaginary technological top in the economy of operation, between buildings in the territory of our municipality.
Sanitary facilities are installed on all floors, including showers.
The dance hall is equipped with audio technology with sound-absorbing sound panels for better acoustics. The hall is fully prepared to provide services for both citizens of Horní Suchá and citizens from the surrounding area.
The building is protected by security cameras, including the Jablotron security system, and its operation is supervised by an administrator. 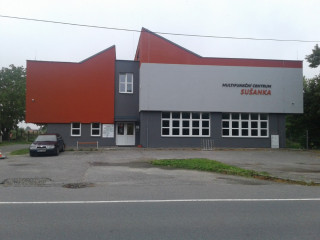